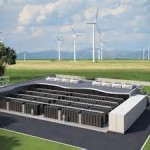 One of the greatest obstacles we must overcome is the challenges faced in storing electricity made from non-reliable sources, such as wind, solar or tidal energy. These sources already produce energy that is above the rates people want to pay, so if it is not used, it presents an even bigger problem with getting utilities on our side and developing these resources. There have been some tremendous efforts in recent years to store energy for later use, harnessing it when it is needed at another point. Yet on demand electricity like this is still one of the greatest hurdles to climb going forward.

For generations utilities have been plagued by a lack of storage for grid electricity, forcing companies to attempt to follow demand with fringe sources, such as natural gas, coal or other technologies. Only nuclear, coal and natural gas can successfully load follow demand. Beyond that, even with these sources, its neither efficient nor as cost effective as it could be to do so. There is always some significant parts of electricity being generated which is never used. Power companies would love to be able to store this for longer periods and release it on demand later.

A number of technologies already exist that can storage electricity, from capacitors, to mechanical storage to batteries. All have their advantages and disadvantages, but few are ever economically competitive in the current marketplace. The greatest challenge faced in this field is to make the viable, and energy dense enough utilities would want to use them – while maintaining a good degree of economic advantages, long term stability and fast response times. In this we will be discussing some of the most promising technologies as well as outline the progress they have made so far in this area, and what they could potentially accomplish in the future.

One of the most promising and easiest for people to understand is the use of batteries to store energy. However, there are some major reasons these have not taken off for grid electricity. They are quite expensive (1000-15,000 US dollars per KWhr of capacity) and have a finite number of cycles they can operate in. Technological progress in this area has been painfully slow as well, further compounding the problem.

A solution that’s been proposed and tried so far, is to use NaS chemical exchanges. By initiating a chemical reaction between two pools of material they can store energy and release it later (thousands of times).  It’s also a lot cheaper than most battery technologies with similar cycle life. There are still many problems, such as Na salts being highly flammable in air and the baths need to be kept at 300 °C, also the batteries will suffer permanent damage if allowed to discharge completely. 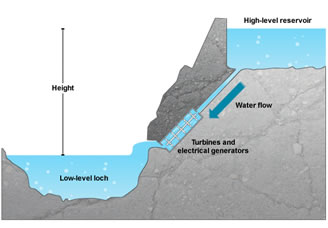 A novel idea is to pump water uphill and then allowing it to flow down again, similar to a dam. The need to store electricity derived from wind and solar is greatest in areas of Northern Europe presently, where countries like Denmark produce around 20% of their electricity with offshore wind. Pumping water from there up to a storage area of later use could be a potentially excellent solution, however, similar to battery storage this is fraught with issues.

In order to even take advantage of this possibility, the location will need to be close to where wind is producing electricity, but also needs to be high up and mountainous. These areas seldom occur in the same place, making it tremendously challenging to effectively do this today. In addition, efficiency from this process is quite low. Electricity generated is used to drive a pump which in turn drives a turbine later. Turbines for hydroelectricity are not particularly efficient compared to heat driven steam generation. As a result, you lose about 70-80% of the energy in this process once its used later. Still, given the complexities faced by battery based storage systems this could be a viable option in the future. These dams also are quite damaging to the environment to build typically.

Fondaterra promotes methods to store all electricity however is economically feasible, given the scale of this problem and how much of an impact it could have on our ability to maintain resources in the future.